A DOMS is a Digital Object Management System. This document describes the open source DOMS developed at the State and University Library in Aarhus, Denmark. Program sources for our DOMS are accessible at SourceForge.

The DOMS aims at fulfilling the following objectives.

What is not part of the objectives:

Overview of a DOMS system

Our DOMS keeps its data in two different kinds of storage:

If, for example, we were to store audio CDs in a DOMS, the actual digitized tracks, along with scanned cover art, could be stored as files in the bitstorage. The Fedora then would keep a metadata object (or a cluster of metadata objects) representing the CD, and containing information about for example artist(s), production year and record label, as well as information relating this CD to the digitized material in the bitstorage.

Our system is available as several different packages, each containing part of the DOMS, and each part interacting with the others.

The packages that form the DOMS are the following:

In addition, the following separate projects are needed:

Finally, you may need:

The figure below illustrates how the different modules make use of each other.

The metadata stored by the DOMS is represented as objects inside a Fedora repository. Each metadata object in the repository contains the following:

In addition to the objects that contain metadata, i.e. which represent the content of the DOMS, there are a number of special objects in a DOMS. These special objects are:

A DOMS comes preloaded with some special objects, defined in the base collection. These base objects are meant as a base for defining your own data models (see below) for specific collections.

The figure below shows the objects in the base collection, and their relations. 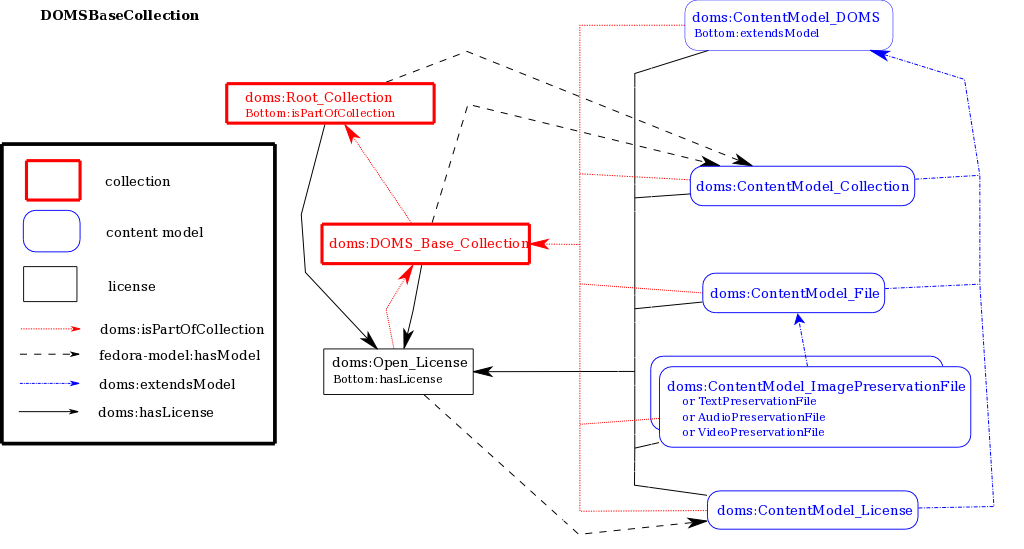 For each collection that is to be stored in DOMS, a data model must be defined.

A datamodel is a description of the formats of data and metadata, and how this data is organised in Fedora objects. In practice, this is done by formal descriptions of content models, defined by Enhanced Content Models. Having a formally described model allows us to validate our data, and to use data model aware software that integrates with our repository.

The DOMS data model, as described above, defines some structure that must be true for each collection. This includes relations to one or more collections, a license for each object, and the requirements for separate file objects containing technical metadata for each file we store in Fedora.

We also assume Dublin Core as one minimal metadata format for each object.

However, the model is flexible, and a data model for a specific collection may define additional metadataformats and relations that describe the formats and structure for that particular collection.